Available at all McMenamins establishments October 15, 2017
through Halloween until gone. 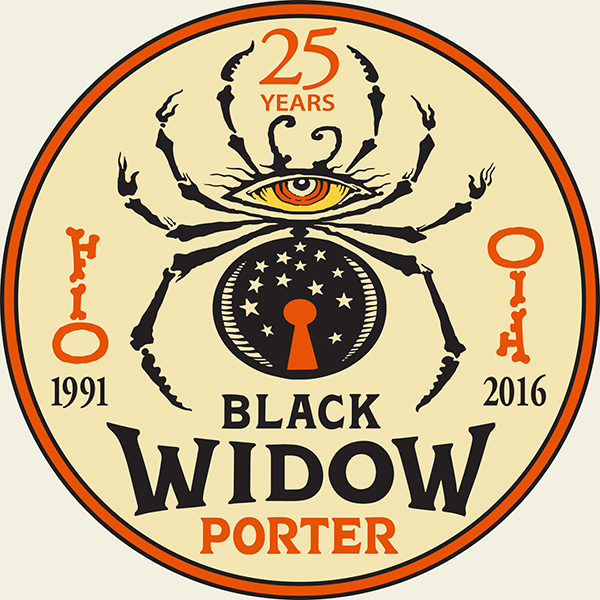 Many full moons have passed and along with them, old recipes have been tucked away - some forever - in dusty, sometimes forgotten nooks, crannies and cabinets in all of our breweries. However, certain beers have a way of establishing their footholds and carrying forward, largely on their own momentum. Originally created at the Thompson Brewery 25 years ago on October 15, 1991 and made by all Thompson Brewers to come after, Black Widow has become an expected and welcome Halloween treat at the Thompson Public House in Salem. Black Widow has expanded her web as it now envelops the entire company. Preparing for this year's brew, alehouses warmed to the task with vats of striking hot water. Mysterious sacks of grain were shuffled to steaming mash cauldrons. Madcap laughs were heard in darkened aging-cellars and Thompson's stairway to nowhere. And brewers bared fangs as well as souls in the ritual preparation of this year's Halloween brew.

As All Hallows Eve quietly approaches us with brilliantly colored trees and the crisp air of fall, it is time to delve into the darker-bodied beers. Let the Black Widow weave her silk over your palate...

Each deep-black goblet of Black Widow is packed full of the robust notes afforded by generous amounts of Black and Roast Malts and further spirited with ethereal wisps of caramel and licorice. Both substantial and sublime, this elixir is sure to slake the most fiendish of thirsts. Open up a creaking pub door, find a seat with friends and family and nourish your inner ghoul with a brew steeped in tradition and mystery. A good howl at the Cheshire moon couldn't hurt, either.