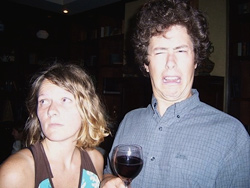 Lloyd "Drew" Phillips is a member of the team at Crystal Brewery. After working at McMenamins for a few years as a pub worker and assistant manager at East Vancouver Pub and Kennedy School Courtyard Restaurant, Drew moved to Edgefield in 2012 as a seasonal brewery assistant. Shortly after, his passion and desire to learn carried him into a full-time brewing position at Edgefield until 2014, when he moved to the Crystal Brewery.

Drew enjoys the brewing team, whom he says are constantly pushing each other to create better beers, more efficiently. As his repertoire of recipes builds, it is a benefit to have a strong group around as both resources and critics.  A fan of traditional British and Scottish styles, when he brews a beer based on an old, traditional recipe, it is a humbling experience for him.  The process and outcome serve as a reminder of how different trends and gimmicks don't change what is fundamentally a good pint of beer.

On a visit from out of town, a friend took Drew to a movie at Kennedy School. Beers and couches in a movie theater is a concept that quickly won him over. Before becoming a brewer, he followed every path people had suggested about getting into the field. The combination of reading a lot of brewing books, homebrewing and job-shadowing the brewers at Kennedy School gave him a true understanding of the process and industry that comes with being a professional brewer.

Though the long brew days and hard work can be grueling, the opportunity to make beer for a paycheck and be part of a team with the same goal makes every day a positive experience for Drew. His best advice came from a co-worker of his at the Edgefield Brewery, Bruce Loux, when he first started: "Never trust a dry, skinny brewer." So Drew keeps his boots wet and belly full, enjoying a life full of beer and cheer.

A Blog About the Ghost Logs