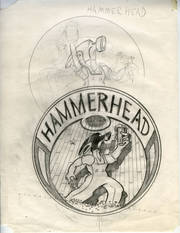 After the usual false starts and frustrated erasures, the local radio station began to play some rousing music, and it all fell together. The ideas popped in one after another and I couldn't draw it fast enough. An unusually large amount of the sketch survived into the final version.

The idea of a character with a hammer for a head is hardly original, but the beer had already received a name that practically demanded some kind of bold, expansive and yet deliberately ridiculous image.

About the author: Lyle Hehn is one of our McMenamins artists and has been with the company since 1988.

Have they covered you on artbeat? I love your work. Hammerhead reminds me of bar bar the elephant.

Love the tower of babel thing on your web page with all the locations kind of wrapping around this thing that is reaching towards heaven. Hopefully god isn't going to look down and be displeased like he was last time. Hah!

Thank you for all the great art!

My cousin Michelle Storey was a part of the team at McMenamins. I have one of the Pint glasses from there.

I bought a shirt w/ this logo ~1994/5, and I still love to wear it. The logo is cracked from so many washings but, especially when travelling, I meet some great characters who recognize it and kick off a fun beer centric conversation... My other favorite artwork is the flying car at Rock Creek Tavern... I'll sit by that wood stove and stare at it over a tasty pitcher any change I get! Keep up the good work -LW

Looking for an artist to Paint my little family of 4, about 5' x 4' (a guess).
Interested and if so, details, please.
Thank you!