Brewers Matt Carter and Kevin Lee will be on hand to discuss the Whiskey Widow and any other of their beers.

Introducing the latest in the Concordia Barrel Series – Whiskey Widow began as our special Halloween ale Black Widow, a porter made for the first time 20 years ago at the Thompson Brewery in Salem, Ore., and made annually in house ever since. Black Widow is a strong, black, roast-flavored porter with subliminal notes of anise and chocolate in the finish, mostly due the licorice root added at the end of the kettle boil. 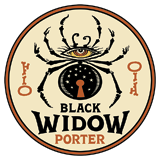 Seven weeks ago, a portion of Concordia's batch of 2011 Black Widow found its way into a freshly emptied whiskey barrel from our own Edgefield Distillery. For six weeks, the complex flavors of the Black Widow rested within the charred-oak barrel still swollen with whiskey. The result is the Whiskey Widow, a sublime and even fuller-flavored porter. You will experience plenty of whiskey aroma (and flavor) coupled with the obvious sensory impressions of hardwood. In spite of its strength, the Whiskey Widow is surprisingly smooth and approachable. All combines to make Concordia's annual Whiskey Widow release is a rich, ebony colored and full-bodied winter warmer. Enjoy now for it is a very limited release – it won't last long.

Concordia 2011 Whiskey Widow Barrel Information:
BBL #08-14 is a 53-gallon, 4-char American white oak hogshead barrel. Four-char is the highest char level we use, otherwise known as "alligator skin" and is the result of about a 90-second char on the open flame. Whiskey Batch #126-10k was brewed at Edgefield Brewery in June 2008. The grain bill was 100% 2 row. It was distilled by end of June, ending up in this barrel on June 27, 2008. We emptied BBL #08-14 on July 19, 2011. The contents of this particular barrel ended up in our third bottling of the Monkey Puzzle.