The Burkhardts & The Floral Past of NW 23rd & Glisan

Last Wednesday, 10/19/16, was a strange, unnerving and destructive day in Northwest Portland. A natural gas explosion caused extensive damage, but fortunately (and amazingly) no lives were lost. Credit for that goes to the quick, thorough action of first responders, who evacuated everyone from multiple buildings at the intersection of NW 23rd Ave. & Glisan St. The Rams Head, of course, is just at the other end of the block, but luckily all of our staff there is fine, and the pub sustained only minimal damage. We're already back open for business!

The one, sad casualty of the day was the complete loss of the attractive, wood-frame building that had stood at 23rd & Glisan for the previous 110 years. It was originally home to one of the neighborhood's pioneer businesses and early families, with fun connections to what's now the Rams Head and the old hotel in which it's located. What follows are details and stories we've learned, mostly from Flora Burkhardt Erfeldt, who was raised in the house at 23rd & Glisan. 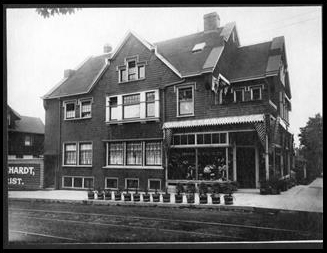 The Burkhardts became famous in Portland for their flowers, and established one of the city's first floral businesses. Brothers Gustave and Alfred Burkhardt had come with their family from Lucerne, Switzerland, to the United States in the 1870s and made their way west, eventually settling in Portland in the early 1880s.

Alfred, according to his daughter Flora, had dreamed of raising flowers and having his own flower shop since he was a teenager. And that's just what he did with brother Gustave beginning in 1882. Together, under the company name Burkhardt Brothers, they acquired a cow pasture at present-day 23rd & Glisan (though Glisan St. had yet to be extended that far west), and laid out a nursery of flowerbeds and built greenhouses.

The partnership proved pretty volatile, though, and was brought to an end when Glisan Street finally was extended westward beyond 23rd Avenue, around 1890. The road, as it was laid out, bisected the brothers' property, prompting Alfred and Gustave to go their separate ways. Alfred and his young wife Anna moved into a small, existing house (built circa 1860s) on the north side of Glisan, where they started their family, which eventually would number six daughters, all named after flowers. 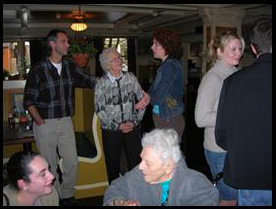 Their fifth daughter, Flora, recalled that her four older sisters "were raised in that little old house. Then when that house got too small for us, [my father] decided to get an architect, Emil Schacht who was very well known [other notable projects of his include the wonderful 1907 Gearhart Hotel on the Oregon Coast, and many prominent homes in Portland's Willamette Heights]. He designed and built our big house on the corner of 23rd and Glisan [see photo above]. It was in 1906, when I was born. Then they carried me over in a little basket to the new house. My little sister was born in the new house... I guess they always hoped for a boy, and they never got one. But my father was very proud of us..."

A large portion of the first floor of the Burkhardts' new house was designed as the retail florist shop for Alfred's business, which he had renamed Nob Hill Florist. Flora talked fondly about this happy, flush period: 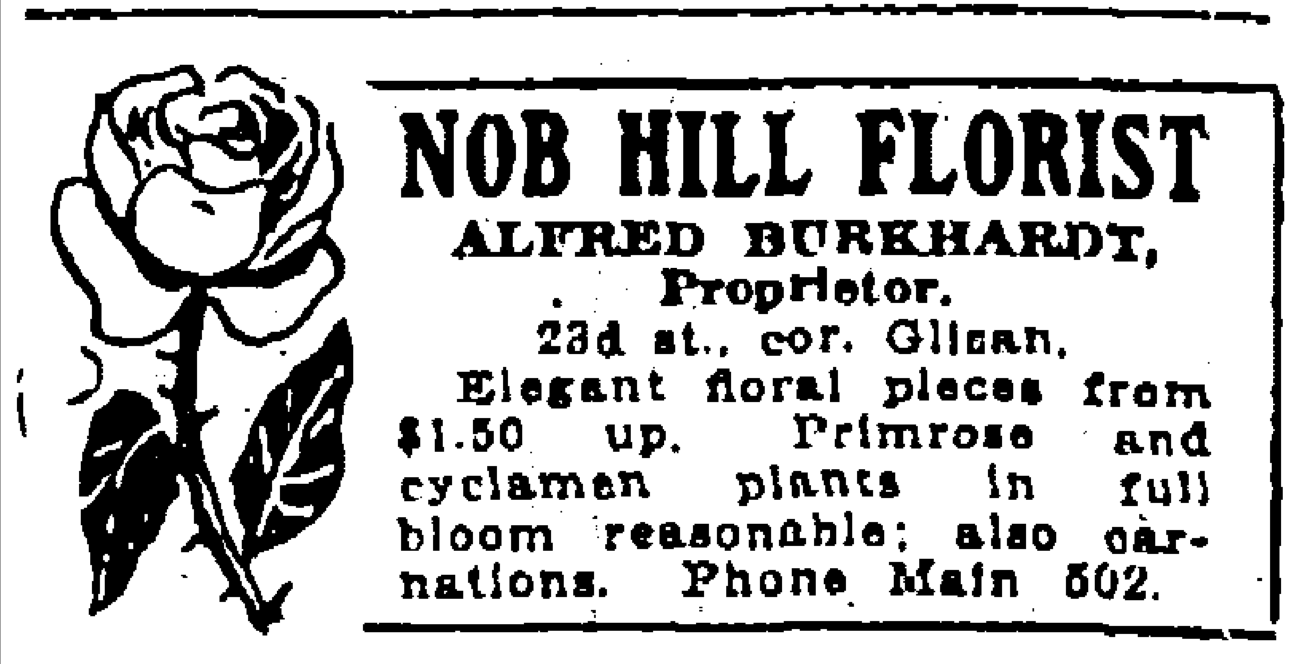 "Across the street my father put in a 100 x 100-foot rose garden. My father raised all those beautiful roses. In those days, Portland was the City of Roses, and he would go out there every day and cut roses and send them to hotels to put on the dining room tables. They were our roses. There was the Portland Hotel, the Multnomah Hotel, the Benson. He supplied all the roses, every day, fresh, for their dining room tables."

In 2005, Flora returned with her family to their old neighborhood to celebrate her 99th birthday [see photo; Flora is at the bottom center]. They gathered at the Rams Head, and shared wonderful stories of growing up on this corner, and even working at the Campbell Hotel restaurant, which today is the Rams Head. 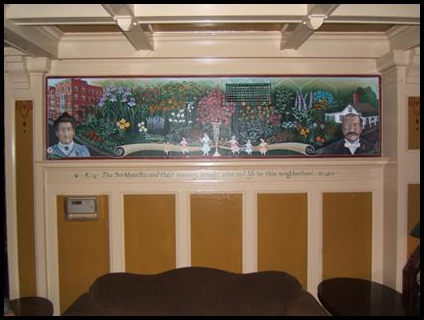 "Mrs. Campbell, the one who built the hotel. She had a mother, Mrs. O'Neil. She was the one who made all the good things, like the sauces, jellies and jams for the dining room at the Campbell. I used to go over and help her sometimes when I was just a teenager. I'd have to pit cherries or cut up vegetables or something, because she would have to take care of all these extra things for the dining room tables.

Sadly, the tangible landmark that was the Burkhardts' 1906 home and shop at NW 23rd & Glisan is no more, brought down by the October 19th gas explosion.

However Flora's wonderful recollections of her family's long-running, pioneering floral business live on, and some are beautifully captured in murals that McMenamins artists have painted in the Rams Head. Another great reason to drop by this neighborhood pub!