On Sunday, October 16, as part of the Art Pub Series, the Mission Theater will host the King of Indie Animation Bill Plympton. Not only will he screen his brand new short, Cop Dog, along with other selected shorts (a.k.a. Plymptoons)., but he'll hand out a free sketch to each attendee! Pretty cool. Tickets are just $10, on sale now at etix.com.

And if you're wondering, "Wait, who is Bill Plympton, again?," but were afraid to ask, just know this: He's the guy who The Simpsons' creator Matt Groening refers to as simply "God." He's also the guy who, in 2005, got a call in the middle of the night, saying, "‘Is this Bill Plympton? This is Kanye West. Are you the animator guy? I want to hire you to do my next music video.'" (Watch it here.) 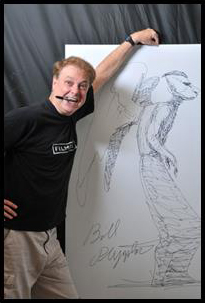 Portland native Bill Plympton is widely regarded as the hardest-working, most prolific animator in the business. Called "mischievous, mordant, analytical, and ceaselessly imaginative" by the New York Times, Plympton has been nominated for two animation Oscars and has made 10 feature films since 1991.

Born in Portland in 1946, Plympton was raised on a farm in Oregon City, with three sisters and two brothers. As noted in his biography, "For the six children, it was often far too wet to play outside. Plympton credits Oregon's rainy climate for nurturing his drawing skills and imagination." He went on to study graphic design at Portland State University (1964-68), where he was a member of the film society and worked on the yearbook. In 1968, he transferred to the School of Visual Arts in New York, where he majored in cartooning, graduating in 1969.

His instantly recognizable and unique style soon catapulted him into the pop culture stratosphere and cemented his place in the pantheon of animation greats. Plympton's illustrations and cartoons have been published in the New York Times and the weekly newspaper The Village Voice, as well as in the magazines Vogue, Rolling Stone, Vanity Fair, Penthouse and National Lampoon. He is the first person to draw a feature-length film entirely by hand.

Here's an excerpt from a 2015 interview, regarding one of his famous Simpsons couch-gags -- just two Portland guys helping each other out:

"I've known Matt Groening since when he lived in Portland. His father, Homer, was a wonderful filmmaker. Very funny. And I met Matt through his father. And so we run into each other at film festivals, or Comic-Cons, and a couple years ago, he said ‘Would you like to work for the Simpsons?' I said ‘Are you kidding? YASSS.' And so he asked me to do a couch gag. And it was very easy, because it was only 30 seconds long. And it was seen by more people than have seen all my films put together. So it was instant fame! Hahahaha! And I've done two more since then, so I've done couch-gags for the Simpsons, and hopefully I'll do more."

Have a look at one of the couch-gags here.