On Thursday, November 10, we're pleased to host the premiere of OPB's Oregon Experience documentary "Vanport" in the Kennedy School Theater. The event is free and guests of all ages are welcome.

Vanport was built in 1942 as public housing for the thousands of workers coming from around the country for steady, well-paying jobs at the WWII Kaiser Shipyards along the Columbia River. The sprawling war-time community (named for its location between Vancouver, WA, and Portland, where Delta Park and the Portland International Raceway are today) quickly achieved the status of Oregon's second-largest city. Only Portland had a larger population. 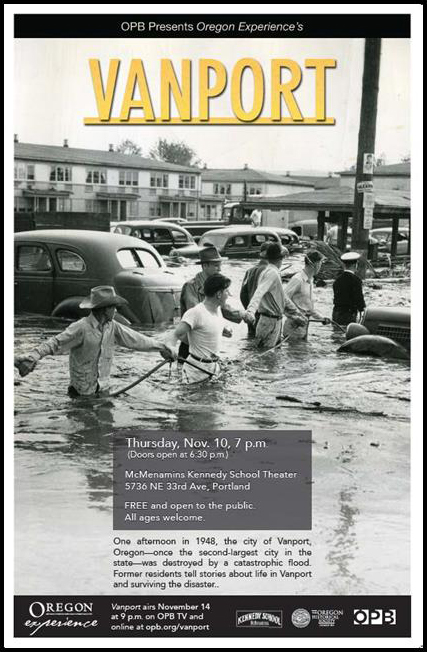 The city was never intended to last more than a few years, until the war ended; therefore, cheaper construction materials were used, and no one considered its precarious setting to be a problem -- essentially it was a shallow bowl surrounded by the waters of the Columbia, kept at bay by a ring of earthen dikes.

At the end of WWII, though, many of the workers chose to remain in the affordable but deteriorating housing. The city of Portland was left with what it considered an "eyesore" and an "undesirable" public nuisance.

Vanport was home to people of all races and colors, yet it was the African American community that was singled out. A 1947 Oregon Journal article said: "To many Oregonians, Vanport has been undesirable because it is supposed to have a large colored population. Of the some 23,000 inhabitants, only slightly over 4,000 are colored residents. True, this is a high percentage per capita compared to other Northwestern cities. But, as one resident put it, the colored people have to live somewhere, and whether the Northwesterners like it or not, they are here to stay."

By May 1948, a snowy winter followed by a warm spring had raised the waters of the Columbia and the Willamette to well above flood levels. On Memorial Day 1948, Vanport residents awoke to a flyer from the Housing Authority of Portland (HAP) that read:

REMEMBER.
DIKES ARE SAFE AT PRESENT.
YOU WILL BE WARNED IF NECESSARY.
YOU WILL HAVE TIME TO LEAVE.
DON'T GET EXCITED.

The HAP was wrong. The dikes holding back the Columbia River failed that afternoon. The flimsy wooden structures that made up the city were no match for the floodwaters. Within 10 minutes, the United States' largest housing project was destroyed. Most demographic records were lost in the flood, but it is estimated that 18,500 residents were displaced, roughly 6,300 of whom were black. While "official" reports stated that only 15 people died in the tragedy, eyewitness accounts tell a story of hundreds of bodies being carted away from the scene. 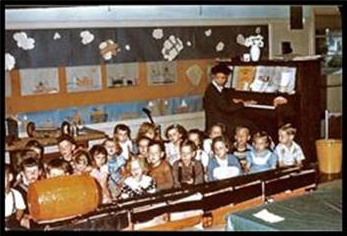 There were bright spots in the vanished city's legacy. For example, when Portland Public Schools refused to hire black teachers, Vanport was the first city in Oregon to do so. Its classrooms were integrated despite the wishes of the housing authority.

Following the flood, our own Kennedy School became one of the very first Oregon schools, after Vanport, to hire a female black teacher, one of the displaced Vanport educators. Kindergarten teacher Martha Jordan (shown here) remained a valued staff member at Kennedy until 1962.

Therefore, it makes perfect sense that the premiere of the Oregon Experience documentary on this important event in American history be held at the Kennedy School. We hope to see you there next Thurs., 11/10.