A Moment with Springsteen

Back in October, fresh off his booksigning at Powell's, Bruce Springsteen stopped by the Tavern & Pool for lunch with his buddy Chuck Palahniuk, author of Fight Club and other works. Sounds like the start of a Portlandia skit, but it actually happened. And one of our T&P regulars, Catherine Graham, was there not just to capture the moment, but in some ways to bring things full circle. [Ed. note: We were unable to verify it was in fact Chuck Palahniuk, although the NW Examiner says it was.] 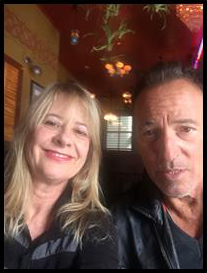 "Excuse me. I live next door and you're in my joint!"
"Is that right? Well, what do you want me to do?"
"Help me make my boyfriend jealous."
"And how do you suggest we do that?"

When Catherine recalls this brief conversation she had with Bruce Springsteen on October 4, 2016, her face lights up. "I totally geeked out," she says. The Boss looked like a regular guy - tired, a little baffled by the selfie phenomenon (you can see it in his face), but that voice... unmistakable.

She'd been sitting in a booth on the south side of the pub, enjoying her "usual" (a burger), when she heard two guys in the booth in front of her get into a fairly in-depth conversation about filmmaking. Catherine is a writer with a background in film history, so she couldn't help but listen in. And suddenly, it hit her - that was Bruce Springsteen. She'd tried to get tickets to the booksigning at Powell's, but their online site crashed before she could cash out. So she was not about to miss this opportunity to say hello to a man who meant so much to her.

Let's rewind the tape to 1984. Catherine Peters was living in San Francisco, having moved there from Portland where she'd been a staff writer at Willamette Week. She was on a date with a guy named Jerry Graham and frankly, it wasn't going that well. But then Jerry said, "So what do you think of the new Springsteen album?" Little did he know that Catherine was a huge fan, having been introduced to Springsteen's music in a UC-Santa Cruz dorm room the early 1970s. He and his E Street Band weren't even on the radio on the West Coast at that time. Catherine said she immediately knew that she and her date Jerry were destined to be together, bonded over their love of a working-class rocker from New Jersey.

Jerry had been a radio guy in New York in the 1970s before moving to San Francisco to be the general manager at KSAN-FM in 1975, a pioneering station in which DJs played album rock and hosted call-in shows. (Famed Rolling Stone journalist and broadcaster Ben Fong-Torres was one of Jerry's DJs.) Catherine says Jerry is today credited with bringing Bruce Springsteen to West Coast radio via KSAN. Jerry and Catherine were married and raised a daughter. They also wrote and produced guidebooks together, based on Jerry's own TV show called "Bay Area Backroads," which celebrated the hidden treasures of northern California. According to the San Francisco Chronicle, Jerry was "the affable tour guide to the Bay Area, and ... one of the most recognizable faces on local television." Catherine also became active in historic preservation, helping to save and reopen the beautiful 1936 Del Mar Theatre in Santa Cruz, CA. And in her spare time, Catherine attended to Springsteen shows, up and down the West Coast; Jerry would arrange great seats for her. And through it all, the Boss's music formed the soundtrack to their life together.

In 2013, Jerry suffered a fatal heart attack at their home in Santa Cruz. He'd been in the best of health, still working and playing basketball at age 78, so it was an immense shock to his family and the San Francisco community. Catherine, their daughter and Graham's two sons were devastated. After two years of grief and mourning, Catherine decided to move back to Portland to be closer to friends and to begin again. She moved into an apartment in NW Portland, right next to Tavern & Pool. 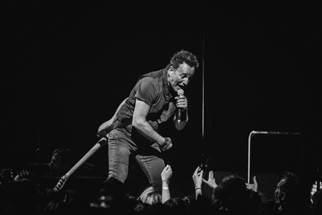 In March 2016, she and her friends got tickets to see Springsteen at the Moda Center (shown here). Longtime fans know that based on your general admission number, you could be randomly selected in a lottery to stand right on the floor in front of the stage. And, of course, that is what happened to Catherine. She was just a few feet away from the stage that night, basking in the four-hour glory that is Springsteen live, when he singled her out from the crowd. "We just had this connection, and he pointed at me, and sang several verses from ‘Thunder Road,' right to me! It was on the Jumbotron and people called me afterward to say they'd seen it!"

So on that late afternoon in October when Catherine realized that one of her and Jerry's idols was sitting a couple feet in front of her, in her joint, she had to act on it. She isn't quite comfortable thinking of it a "cosmic occurrence" or some sort of love letter from her late husband. To Catherine, it was just one of those incredibly cool things that can happen in life.

Today, Catherine is a yoga instructor, is in a new relationship and continues to write - she's working on a piece called "Springsteen Widow," which traces her marriage from that first date to her finally being able to listen to Springsteen‘s music again, more than a year later.

Here in Portland, she feels like Tavern & Pool is an extension of her home and her family. She is comfortable there; it suits her. "Springsteen is all about burgers and jukeboxes... It was just perfect that I was having a burger in my spot and he walked in."