There is a new round of coasters out, and here we are to give you a little background on each, before they are set on the tables only to get soggy, stained, shredded, drawn on or collected by the coaster hoarders.

Artist Lyle Hehn designs our coasters, using his own artwork or that of one of his fellow McMenamins artists. Their explanations or inspirtations for the pieces are provided below. Cheers. 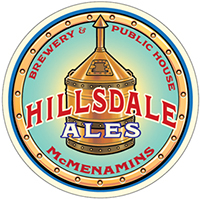 From Lyle: "The Hillsdale coaster is just a round version of the pub's logo that's been around for a long time. The older version fits inside a diamond shape and was based loosely on the original version that was printed in just black, purple and gold colors back in the 1980s." 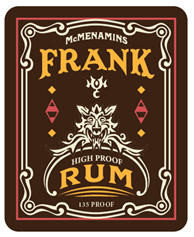 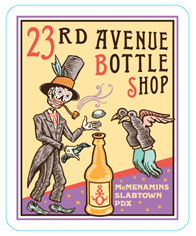 From Lyle: "The ‘Frank' coaster is taken directly from that rum's label which I designed last year. There's not much to say about this design, other than to imply that drinking this high-proof rum will make you feel like the monster on the label. The ‘23rd Ave. Bottle Shop' was designed specifically for a coaster. It commemorates the recent opening of the Bottle Shop. It took a long time for me to figure out the design. I have no sensible explanation for the two characters. They just kind of showed up in my sketches." 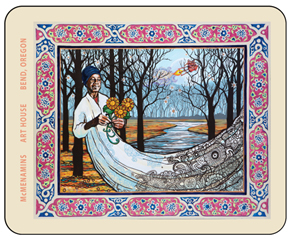 From Myrna Yoder: "I wanted to capture some of the things that have meaning for me based on the art that I have done over the years for McMenamins. I started by including a reproduction of a border that I did in one of the bedrooms at Kennedy School to honor the significance of the border work we have done there since 1997. Wanting to give a nod to my printmaking background and the graphic nature of my woodcuts, the trees are dark and woodcut-like. The figure was a resident of Edgefield when it was a nursing home. She has been one of my favorite subjects. She is holding sunflowers that are inspired by the beer label that I did for Sunflower IPA. Her dress is embellished with decorative flowers inspired by Mehndi designs that I have used in a number of paintings. In the distance is a moon, which is a common element in McMenamins artwork. In front of the moon rockets the Edgefield water tower and its riders. It was one of the first things that I painted for McMenamins that still exists and I wanted to include something from the beginning. The snow is inspired by my experience of Bend itself. As I painted one of the outside decorations on the St. Francis School before it initially opened, the snowflakes started to fall around me."

[Ed. note: The woman pictured is Frankie Baker, former Edgefield poor farm resident, commonly associated with the song "Frankie and Johnny" as well as movies starring Mae West and Cary Grant, and Michelle Pfeiffer and Al Pacino. The ballad was attributed to Frankie Baker after her fatal dispute with a suitor in 1899 in St. Louis. Acquitted of murder, she came to Oregon. Baker never made a dime from her story, the song or the films. In 1949, she became the first life member of the Urban League of Portland. Just months later, the destitute Baker became a resident at the Multnomah Farm (today's McMenamins Edgefield). She was transferred to Eastern State Hospital, where she died in 1952.] 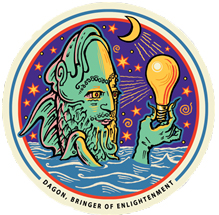 From Lyle: "The round coaster of Dagon is just a random picture I drew some years ago and Mike finally agreed to using it as a coaster. This is the same character used for the Spar Café logo." 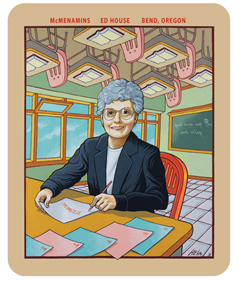 From Assistant Historian Emlyn Bruns: "Sister Farroel Richardson arrived at St. Francis School in the mid-1970s after a quarter-century of teaching and school administration all around the Pacific Northwest. As an educator, Sister Farroel worked her students hard but had fun with them, too. She even allowed them to play jokes sometimes, because, as she recalls, ‘They have great senses of humor at that age. They're just exploring their own humor, and who they are, and it was a wonderful thing to teach.' The highlight of this revelry between the St. Francis School teacher and her students occurred one April Fool's Day. During the lunch hour, some of her students snuck back into the classroom through a window and moved all the furniture so the room became a mirror image of what it had been. Sister Farroel's reply to the clever display was admiration and laughter. In her own words, ‘You have to laugh or you're dead!'

"Reflecting on her decision in the mid-1970s to request re-assignment to Bend, Sister Farroel says those years in the St. Francis community truly were an idyllic way to bring to a close her long, meaningful career in education. "Most of the families at Bend were just wonderful . . . very caring, very supportive of their kids. " What more could a teacher ask for?" 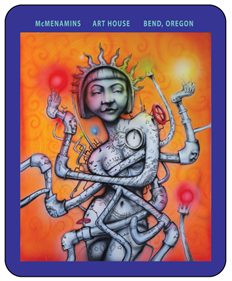 From artist Damian Zari:
"Our Lady of the Pipes"
Influenced by McMenamins artists Olivia Behm, Myrna Yoder and Lyle Hehn
The face is mirthful like a McMenamins Crystal Ballroom jester (in downtown Portland, OR), reflections like the golf picture on the immediate left in west entryway to McMenamins Edgefield in Troutdale, OR. Pipes are influenced by the Boiler Room (at the McMenamins Kennedy School in Portland) and Olivia. Colorful outlines and flow influenced by Myrna's work in the south entrance of the Power Station at Edgefield. Lights influenced by, well, everywhere within McMenamins. "The monuments of history being occupied by new life." I'm adding some signage, a swarm of black rabbits (McMenamins) sweeping down the hill (progress) and a murder of crows (Anderson School in Bothell, WA) breaking from trees (Pacific NW). 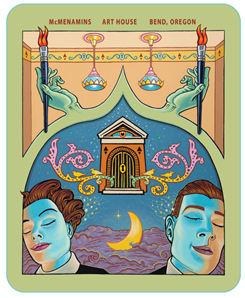 From Lyle: "To suggest that McMenamins' artwork influences the dreams of the hotel guests is to enhance the likelihood of it happening. This painting shows the process going the other way. Two blissfully dozing lodgers recline inside a dream version of their hotel room. Their brains merrily concoct illogical scenes and stories that are transmitted into the dream catcher painted onto the headboard above. Somewhere else, a sleeping artist receives the dream transmission and wakes up with an idea for a new painting. No one involved has to be aware of this communication. No one even needs to remember the original dream. No copyright laws are violated.

Year after year, new artwork is added to McMenamins' walls and dreaming customers unwittingly contribute to the cycle: dreams into artwork, artwork into dreams."