Our Lady of the Pipes

As you probably know, each room at the new Art House at Old St. Francis School is named for the title of a painting done by one of the artists who have lent their talents to McMenamins properties.

Artist Damian Zari has a wonderful and distinctly different style from what we are used to seeing at our properties - for example, he uses an air brush to spray the paint onto his canvas (whether the canvas be a wall, a piece of fabric or the human body). Below is the piece he did for the Art House, his summary of his influences for the work, and his bio. 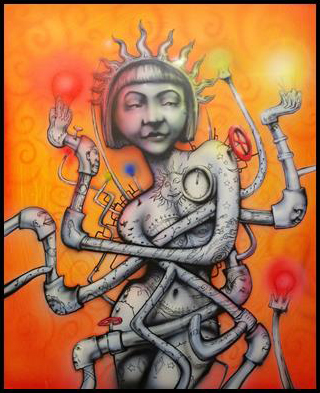 "Our Lady of the Pipes"
Influenced by McMenamins artists Olivia Behm, Myrna Yoder and Lyle Hehn

The face is mirthful like a McMenamins Crystal Ballroom clown (in downtown Portland, OR), reflections like the golf picture on the immediate left in west entryway to McMenamins Edgefield in Troutdale, OR.

Pipes are influenced by the Boiler Room (at the McMenamins Kennedy School in Portland) and Olivia.

Colorful outlines and flow influenced by Myrna's work in the south entrance of the Power Station at Edgefield.

"The monuments of history being occupied by new life."

I'm adding some signage, a swarm of black rabbits (McMenamins) sweeping down the hill (progress) and a murder of crows (Anderson School in Bothell, WA) breaking from trees (Pacific NW).

About the Artist
With his blend of graffiti, tattoo and graphic art, Damian Zari was greatly influenced by the works of Frank Frazetta, Jean Girard (Moebius), Richard Corbin, Da Vinci, Heavy Metal Magazine and the tattoo art of the bikers he grew up with. After spending many hours of his youth drawing instead of participating in school, he applied for work with an airbrushing company in southern California. He was handed an airbrush and told to figure it out. His talent landed him the job and he began his pursuit in art.

Damian moved back to his birthtown of Portland, OR, in 1997. His work has since been published in Willamette Week, Portland Mercury, PORK, The Oregonian and The Daily Journal of Commerce. His fine art has been shown at Gallery Zero, The Know, Backspace and Weapons of Mass Compassion. He was a finalist in the Illustrators of the Future contest and is a current contributor to Hypno Komix.

In 2007, he finally "stopped going" to his cubicle job and became a vendor at the famous Portland Saturday Market. He is currently studying to acquire his tattoo license while working as a freelance airbrush artist.