Edgefield Winery's 2015 Poor Farm Pinot Gris is soon to be released, and this year, the label features this work by Lyle Hehn, called Match in the Attic, which is installed at Anderson School in Bothell.

The women shown were based on three of the four daughters of Ben Boone (also pictured below), whose phenomenal story includes links to frontiersman Daniel Boone, cattle-rustling during the 1890s Gold Rush, legendary author Jack London, Mike and Brian's grandfather Charlie Wentworth, rodeos on the Squak Slough and 85 cases of whiskey. 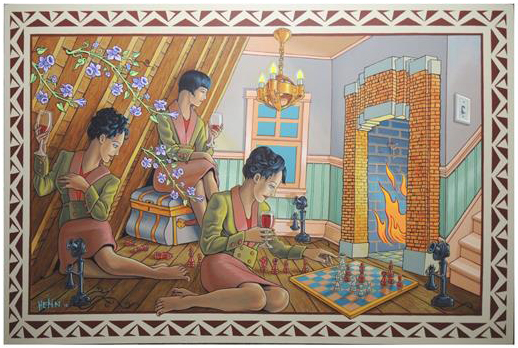 Benjamin Boone, patriarch of the Bothell Boone clan, lived a mythical life. He was a skilled cowboy, an early Alaskan gold miner, an explorer of the Pacific Northwest, a prominent Seattle entrepreneur, a successful cattle rancher and a devoted family man; he packed several lifetimes worth of living into just 84 years.

A colorful character with a heart for adventure, Ben was a direct descendant of Squire Boone, brother of American folk hero Daniel Boone. Whether mining gold or riding the range, Ben continued the Boone family legacy of hardy huntsman settling the American frontier.

Born March 7, 1876, Benjamin Ewing Boone was the eldest son of Dewitt Turrine and Harriet Ellen Boone of Elkins, Arkansas. Suffering from the post-Civil War Depression of the South, his parents moved to a homestead in West Texas when Ben was a small boy. He spent his childhood working on the farm, hunting and riding horses.

Predominantly educated by a rural school book, Fourth Level McGuffey's Reader, Ben finished schooling by the time he was a teenager. Life on the range called; by 15, the young cowboy was driving cattle from Texas to Montana. A year later, in 1892, Ben moved to Colorado, where he worked for the Denver and Rio Grande Western Railroad, before taking up mining and tending bar at a saloon in the thriving goldrush town of Cripple Creek.

But by 1897, Ben's desire for exploration had him on the move again. A Seattle businessman hired Ben to take a load of cattle, by ship, to the mining camps of Alaska. Upon arrival, Ben made a gold claim north of Fairbanks and spent several years prospecting with his parents and sister, Norah. While there, Ben also shared a cabin with Jack London and inspired the author's best-selling novel, Burning Daylight. After a decade of life in the harsh tundra, the Boones returned to the Lower 48 in 1909.

The next year, Ben set off to New York for business college. Once graduated, he headed west, settling in Portland and opening a few of the earliest auto dealerships. He was in good company! This was around the time Mike and Brian McMenamin's grandfather, Charlie Wentworth, opened Wentworth Motors in Portland. The dealers were a tightly knit group back in those days; no doubt Ben and Charlie enjoyed a whiskey over shop talk.

In 1914, Ben reunited with his family in Washington and expanded his auto sales into the Emerald City. He quickly rose to prominence in the local business community with the creation of financing plans. He approached auto manufacturers about the idea; when they laughed at the concept, he did it himself!

Ben was always a proven straight-shooter in business. As his grandson recalls, "There was a party and I sat down next to this older gentleman . . . he says, ‘Your grandfather was Ben Boone! I borrowed my first dime from that man, and if I didn't pay him, he was at my door the next day.' . . . I'm sure a lot of people have that memory of him."

Ben was firm but fair. His reputation and keen sense allowed him to expand his business to include real estate, brokering and lumber ventures. With his finances set, Ben (now 43) was able to focus on the homefront. He didn't have to go far. Lila Ida Maud, a secretary in his office, caught his eye and lassoed his heart. They were married April 3, 1919. Together, they had four daughters: Lila, Bonnie, Barbara "Montana" and Beverly "Tex" (the last two nicknamed by their dad for his favorite places on earth).

In 1924, Ben moved the family to Bothell onto a pioneer farmstead overlooking the Sammamish Valley, originally settled in 1870 by George Rutter Wilson. Since 1916, Ben had been making improvements to the property to create a ranch like the one on which he'd grown up.

From their beginnings at the newly christened Boone Ranch, the family lived a 20th-century version of the Wild West on the Squak Slough. Ben would drive around the countryside in his Cadillac and if he spotted a calf he liked, he'd buy it and toss it in the backseat for the drive home. He was the first rancher in the country to successfully raise beef cattle and originated the Boone (and eventually Bothell) tradition of yearly round-ups on the ranch. When he and some friends started the Issaquah Rodeo in the late 1920s, it was Ben's steers and broncos they drove up the old brick highway for rodeo stock. His daughter Bonnie recalled, "Anyone with a horse who could help without getting in the way was invited to come along. . . . Kids ran behind like following a circus, and although it would have been a little dangerous had any animals broken back, my dad loved kids and so allowed it."

The cowboys would stop in a pasture north of Redmond for a night of steaks off the chuck wagon, tall tales and whiskey under the stars. At first break of dawn, they'd roll out for the rodeo grounds. As his grandson reflected, "That was his love . . . he was a rodeo man." Ben continued to serve as a judge and pickup rider at rodeo competitions well into his 70s.

A cowboy through and through, legend has it that at 75, Ben bought 85 cases of whiskey, figuring it would last him the rest of his life. It was said he almost broke even. He continued riding up to the end; when he shuffled down the dusty trail for the last time, his daughter "Tex" and her husband, Dick Truly, took over the ranch. And so the Boone family legacy rolled on . . . .