We are in the process of updating and compiling history sheets for all our properties, and last week I was able to spend some time in Sherwood, OR. Not only is it the site of our Sherwood Pub but it's the source of some really fantastic old stories.

This idyllic little bedroom community southeast of Portland was named by Money magazine as "among the top 50 best places to live in the United States" in 2013. But back in the late 1800s, things were different - Sherwood (originally referred to as Smockville) was considered "a tough town," with "rowdyism and drunkenness," a place where "gunplay was not unusual and street brawls were common."

Read on for a great story from 1890, one that would lend itself quite well to an original painting by a McMenamins artist... 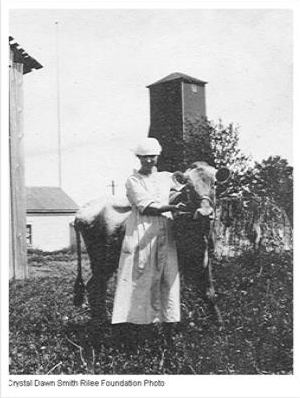 "In 1890 a seventy-five-foot water tower was erected over a dug well on the city property off Main Street. An eight-thousand gallon tank was mounted on this tower and filled by a hand pump operated by six men. ... This seemingly simple water system was nevertheless a big step in the way of fire protection in this previously unprotected town. [Photo at left shows the five-story water tower, with a local woman flanked by Old Betsy the cow.]

"An interesting sidelight upon the building of the water tower is the story of John Woida, a saloon keeper. The tower was built with license money from the saloons in town and Woida, feeling that he had in a great measure, personally paid for the improvement, said boastfully, ‘I built the steeple on the town, I want to climb up and have a look at it.'

"Now Woida was a corpulent individual and the tower was tall and not easy to climb, so some of the men bet old John that he couldn't climb it. But climb it he did, one evening after supper. He got up all right and looked around, but when he attempted the descent his nerve failed him and he pleaded for help. 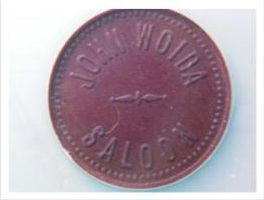 "Four of the interested spectators... went up to help him. They tied a rope around his rotund stomach and let him down the outside, kicking and sprawling like a big spider on the end of a cobweb. His cries were heard all over town and everyone came out to see the sport. A good time was had by all except, perhaps, John Woida."

I haven't found photos (yet) of the corpulent Mr. Woida but below is a saloon token from his establishment. The flip side says "Good for 5 cents in trade at the bar." According to city records, the saloon opened in 1890 but had closed up shop by 1899.