High among her many accomplishments is the Music Project at Secondary Academy for Success (SAS), an amazing program initially launched for musicians at what's now McMenamins Anderson School. Bascom was recruited to lend her vocal talents and inspiration to the project. It has been a wild success with the students from the get-go, and continues to this day to bolster their confidence and help them reach higher musical heights. This week, the Woodinville Weekly ran an article called "After a Decade, Bernadette Bascom's Music Project Sings Stronger Than Ever" (link to the full article below, which includes a cool photo of Bascom with her Emmy and Wonder). 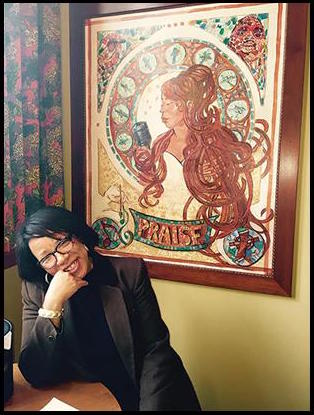 Bernadette Bascom grew up in Baltimore, but Seattle is her beloved adopted hometown. Her father, Rev. Marion Bascom, was a Baptist minister and a civil rights leader. Her mother Lutherine Bascom was a music teacher. Is it any surprise, then, that Bernadette ended up blending the two influences, in a way that has benefitted the Pacific Northwest aesthetically as well as spiritually?

Bascom has been a central figure in the Music Project, a non-profit organization that helps underserved and at-risk youth find a voice - literally and figuratively. The literal part is Bascom's forte.

Her dad - by all reports a serious man, with a PhD from Howard University - emphasized education first. Her mom, in fact, had to sneak Bernadette to gigs and rehearsals. Those clandestine forays were successful. Bascom's talent was undeniable, one of those things that ultimately couldn't be held back. Her dad insisted she enroll in college and she did. She lasted a month before the siren called, and she returned to Baltimore. Almost immediately, she got her break: she was invited to join a group called The People's Choice, who had just hit it big with a #1 single, "Do It Any Way You Wanna."

The group made a fateful tour stop in Seattle, and Bascom fell in love - with the city. She decided then and there to stay, and immediately ensconced herself in Seattle's legendary funk and soul scene as a member of Epicentre and Acapulco Gold.

Her childhood friend - this guy named Stevie Wonder, maybe you've heard of him? - came for a visit and surprised her by joining Epicentre on stage during a 1979 gig at the Aquarius. Soon after they harmonized in front of 700 people, Wonder signed Bascom to his label, Black Bull records.

Along the way, she performed with and shared stages with everyone who mattered - Frankie Valli, Al Green, Elton John.... The five songs she recorded for Wonder languished, like so many do in this business. But in the long run, it didn't matter. Bascom made a name for herself the old-fashioned way. She tore up Las Vegas in a series of top-tier shows, including a long-running part in Divine Divas, and playing one of the Supremes in the cast of Motown Café at the New York, New York.

In the early 2000s, however, the gigs dried up, and Bascom found herself in need of a spiritual rejuvenation. She returned to the place that she had called home for a long time - Seattle. Once again, she thrived, creating and headlining a popular, long-running stage show at the Triple Door.

But for all her accomplishments, Bascom's lasting legacy is her commitment to improving the lives of young people through the magic of music. She has taught countless students as a vocal coach at Northwest University. She's known to all as a teacher who cares intensely and instills a sense of confidence in her students.

"Confidence has been the bottom line," she says. "It's about music, but it's not. You know? Music is just the vehicle to drive to the destination, which is self-esteem, which is confidence . . . ." That drive is directly related to Bascom's connection to the Anderson School. From 1973 to 2009, Anderson housed Bothell's alternative high school, the Secondary Academy for Success. When longtime SAS teacher Jim Geiszler established the Music Project - an organization that helps students gain self-esteem and life skills through music - he knew Bascom was a natural fit.

Bascom agreed to help, and the Music Project exceeded expectations. Hundreds of students have learned self-esteem, life skills and confidence through performing together as a musical group. Bascom's guidance has been integral to that process, almost from the start. "They all moved on to life," Bascom says, of her Music Project students. "And their lives. And they're all thriving. They're all thriving."

Bascom's giving nature was recognized in 2013 when she won an Emmy Award for her participation in a documentary called Bernadette's Touch, which focused on her work with young people with speech impairments. As she teaches them to sing, they discover the joy and confidence that comes from having their voices heard. It is that kind of giving for which Bascom will always be remembered and loved. Her light shines in Bothell, in Seattle, through the Pacific Northwest and beyond.