Talking with The Freaks!

Its quite safe to say that The Freak Mountain Ramblers are an institution in the McMenamins music community. Going into their 12th year as a Great Northwest Music tour regular, not once but twice per season, we wanted to chat with The Freak Mountain Ramblers about how this relationship came to be, and to rehash some great memories they've made with us over the years.

Interview with Saint Motel in the Green Room, Crystal Ballroom May 28, 2016

McMenamins photographer Kat Nyberg had the opportunity to sit down with Saint Motel before their show at Crystal Ballroom on Saturday for a fun, spontaneous interview and photo shoot. Find out why the Crystal is one of their favorite venues, where babies come from, and other interesting topics. It was an amazing show for everyone, and the interview was a fun bit of spontaneity for both Kat and the band.

Thanks for a great night guys! 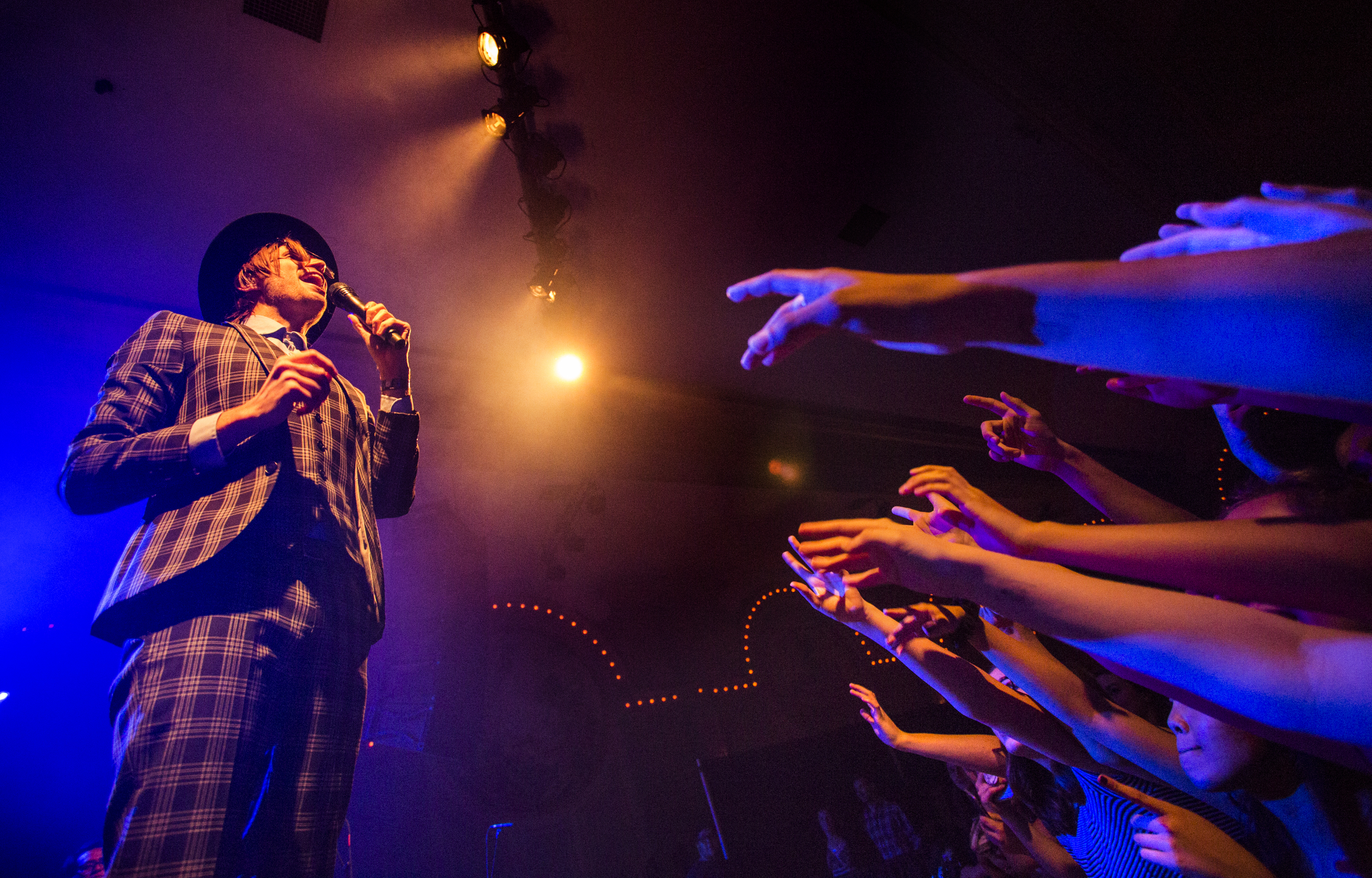 Through June: Earn Join The Band loyalty points at Al’s Den and the Annex!

Are you a member of the Crystal Ballroom’s “Join The Band” loyalty program? Now through the month of June we’re rewarding points for all food and beverage sales in Al’s Den and the Annex.

You know what's great? Our Music Residency Series at Al's Den. I'm not just saying this because it's my job to photograph them -- I have seen some of my favorite acoustic, live music in Portland there (and it's only been open since May ‘11). I knew this tiny room had a hold on me during the Crystal Hotel's opening when Lewi Longmire, Evan Way, and Mike Midlow started singing Neil Young covers -- swoon.

This is pretty magical.

Back in the day (as in, 50 years ago), three talented men anchored the hoppin' downtown jazz scene, whose epicenter happened to be clubs that stood where the Crystal Hotel is today: Charlie Gabriel, Mel Brown and Carl Smith.

Each man eventually left Portland to make his way in the music world. All three went on to great success in the New Orleans and Motown scenes; all three left an enduring mark on Stumptown's musical history.

And now, each man is returning to their old stomping grounds -what is now the Crystal Hotel & Ballroom.

Okkervil River's hotly anticipated new album I Am Very Far isn't due out 'til May 10, but tonight the band will be streaming a live performance of the album in its entirety! Wish we could take credit for this one, but the Pitchfork website has the scoop on where you can catch the live webcast tonight at 4 p.m. PST.

One Love for Chi

As Deftones fans most likely -and sadly-already know, the band's longtime bassist Chi Cheng suffered serious brain damage as the result of a 2008 car accident.

Cheng has never recovered; he remains in a semi-conscious state.

As of May, 2010, Cheng began to show signs of significant improvement. He can track people with his eyes and slightly move his hands. But, obviously, he has a long way to go.

This is where the Deftone's second show at the Crystal Ballroom, slated for Saturday, April 16, comes in...

The stars of our current McMenamins Small Batch Tour, Christabel & the Jons may play an old-timey style, but the group is not anachronism. Rather, the quartet manages to coax jazzy genres from the past out of the mothballs and into the future. The result is simply gorgeous: A mélange of countrified folky jazz swing and, lately, a sultry bossa nova groove, above which floats the voice of Christa DeCicco. DeCicco's voice is tailor-made for jazz; her lyrics -sharp and clever-and melodies are more catchy than any pop song. Despite the bands penchant for thrift-store finds and acoustic instruments, it all feels very much grounded in the now, thanks to smart musical twists and turns, seemingly effortless blending of genres, and a sparkling energy.

To celebrate '80s Video Dance Attack's sixth anniversary party, I had planned on writing several glowing paragraphs about how much un this weekly event is. After all, every single Friday, hundreds and hundreds of people -many clad in glowing plastic bangles, pegged jeans and Pretty In Pink-esque prom dresses-crowd the Crystal's dance floor and straight up get into the groove. This isn't one of those parties where patrons stand around watching a couple people dance; this is a fun, sweaty, fully interactive blowout that pulls in an age range between those just old enough to drink legally and those who purchased Madonna's first album...on vinyl. The day it came out.

Venture Out to Hear the Ventures

Should a band that's been playing since 1958 have a MySpace page? In a musical world full of pop stars whose blip of fame barely registers long enough to produce a ring tone, The Ventures may be the only 53-year-old band to be able to pull it off.

David Mayfield: We Dare You Not to Dance

Bearded and bespectacled, David Mayfield doesn't initially look like the type of performer who could whip a crowd into a frenzy. But with his swiveling hips, sexy moves (ironic, or not?) and loopy charm, Mayfield exudes an awkward charisma that elicits hoots 'n' hollers.

Small Batch Tour: All Hail the King (Perkoff, that is)!

You don't have to be a jazz fan to dig the coolest cat around, King Perkoff. The dude is to saxophones what LeBron James is to basketball – a master of his art, and a hell of a lot of fun to watch.

The Spar Café: It's been a saloon, a rooming house for rowdy sailors, a billiard hall, a bowling alley and even a haven for gambling. It's been a meeting place for longshoremen and politicians, students and native Olympians. And now, while maybe less raucous than it used to be, the Spar is re-instating a staple of its past: Live music.

Jazz, Up from the Underground

In a town like Portland, blessedly overflowing with indie rock bands, sometimes jazz gets overlooked. Portland actually has quite a strong jazz scene, and, as befitting our unconventional little burg, that scene is home to a creative substratum that likes to push the boundaries of the genre.

We told you that all our McMenamins Music Tours were about to kick it into high gear, and we weren't kidding. Tonight, the Wiyos kick off their Small Batch Tour (which will hit three properties in two days!) at the Kennedy School.

There's old-school, and there's way old-school, and the Wiyos definitely fit the latter. This crew of modern Tin Pan Alley crooners seems to hail from an era when newsboys crowed from street corners and a fedora topped every head. These anachronists somehow manage to infuse their songbook -clearly taken from the popular music of the 1920s and '30s, with an almost imperceptible modern-ness. The result is both a nostalgic look at the past and an eye on the future.

I challenge anyone to really describe Y La Bamba (currently on the Great Northwest Music Tour) accurately. This band is so original, so genre-bending, so strange (in a good way), they defy the usual modus operandi of lazy music writers everywhere: comparison. Comparing this Portland group to any other band is simply impossible.

So we'll have to do the best we can, with snippets of aural imagery and forays into the band's personality. So let's try: Moody, melodic, multi-cultural post-folk (that is, folk with a bit of a backbeat -which in this case feels like a melancholy heartbeat) centered on singer Luzelena Mendoza's swirl of a voice. No, "swirl" is too weak of a word. It's strong and feminine, like a Frida Kahlo painting, this voice. No, not like a painting -- like Frida herself.

Spring is, if not exactly around the corner, at least within a few flips of the calendar page. What does that mean for us? Well now's the time of year we really ratchet up our McMenamins Music Tours. But you may be wondering: WHAT ARE THESE MCMENAMINS TOURS, ANYWAY?

Our Faves the Avetts, at the Grammys!

We here at McMenamins music have a special affection for the Avett Brothers. After all, we have quite a history with these fellas: They've traveled our properties as a Great Northwest Music Tour headliner, played four Crystal Ballroom shows, and absolutely tore it UP at last summer's Edgefield Concerts on the Lawn (side note: Avett fans are very good tippers. Thanks, y'all!).

So we couldn't be more pleased to spread the word that our favorite heartfelt stomp-rock-country-roots band will be playing at the Grammys this year! The Avetts will be sharing the stage with Bob Dylan, no less (another Edgefield Concert star from last summer, by the way) and Mumford and Sons, who of course took over the airwaves this past year.

The word "opera" doesn't usually conjure up the words "light-hearted comedy," "kids fare" or even "fun." The art form, succumbing to the slow change in taste over the centuries, is nowadays often seen as a stodgy old art form, reserved for stodgy old people, to be performed in ornate (but still stodgy!) old opera houses.

Get Crystalized at the Ballroom’s Big B-day

When my esteemed music marketing overlords asked me to write a blog entry giving you the lowdown on the Crystal Ballroom's 97th Birthday Free-for-All, my first thought was, "Uh, sure guys, that's all fine and dandy in theory, but how could I possibly describe the ultimate awesomeness that this party entails? It will take 25 pages, and our readers have lives, ya know!"

So I figured I'd narrow it down. Give you a real feel for what this affair is, not just some fluffy words. To wit: