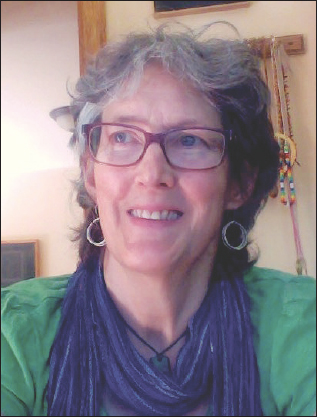 I am an artist based in Eagle Creek, Oregon. I have been producing art professionally for more than 30 years. There are several different mediums that I work with - papier mâché, paint, oil clay, bronze, pen and pencil. My artwork ranges from quiet and contemplative pieces, to work portraying the more exuberant and joyful side of life. I like to paint people, plants, birds . . . I like music and movement. I keep working until the piece feels "true" to me.

I have displayed my artwork at the Oregon Country Fair since 1979. The free, creative spirit of the fair has had a definite influence on me and what I do as an artist. Originally I sold papier mâché in the form of Peculiar Piñatas, and gradually moved toward more sculptural pieces, many incorporating natural objects such as sticks, vines and moss.

My figurative bronze works developed after I made a life-sized papier mâché sculpture of a woman in 1985. My friend, the sculptor Nano Lopez, worked at an art foundry. He encouraged me to refine the piece and to have her cast in bronze. I learned all about the lost wax bronze casting process and in 1986, The Young Woman was my first bronze sculpture cast at a foundry in Walla Walla, Washington.

Beginning in 1980 my partner Joe and I shared a studio/gallery space called the Chameleons Garden in Estacada, Oregon. Joe painted, made silk-screened prints and cards and worked with ceramics. I painted, made various papier mâché creations and sculpted. We also held years of weekly life-drawing sessions. My brother Peter Bush, owner of Rosebush Marimbas, joined us in 1986, making fine hand-crafted marimbas. The Chameleons Garden was a great work place and the site of many art gatherings in the 1980s and early '90s.

The first mural project I worked on was called Struggle and Hope. It was sponsored by the Portland Central America Solidarity Committee back in 1988 and designed by Bill Garnett. A group of artists were called together to paint it. We were taught how to take Bill's small scale sketch and by using a grid, translate the drawing to the full mural size.Very useful information! The mural was originally located in Portland but now can be seen at the Rock Creek Portland Community College campus.

I am a founding member of the Artback Artists Cooperative in Estacada. Organized in 1993, we have painted a large-scale, outdoor mural in our small, rural community each year since 1994. I have been the lead artist on four of them: Celebration '98, Tree of Life 2003 (in collaboration with Reeva Wortel and Emily Hyde), Bird Party 2007 and most recently on the renovation of Joe Cotter's The Cycle of Wood mural. I also have murals in the National College of Natural Medicine, the Molalla Public Library and Eagle Creek Elementary school.

My artwork has been in the Spiral Gallery, a cooperative in downtown Estacada, since its inception in 2003. The Gallery provides a much-needed and much-appreciated gathering space for artists and their supporters.

Finally, since 1997, I've had the good fortune of working for McMenamins as one of the artists painting in their historic hotels and pubs. I am grateful to Mike McMenamin for being so supportive of the arts. I enjoy the opportunity to work with the other artists, who have become friends as well. As a group, we have had three shows together in the Portland area.

A Call from the Past